How Window Tinting Works – A Beginners Guide in Details

You don’t need to be a Mafia don or Hollywood star just in order to do a window-tinting job on your car. Everyone can equip this feature to keep privacy in car.

Besides that, there are a number of other perks of it that you’ll surely appreciate. It provides protection from sunlight and UV rays, enhances the visual beauty of your car and so on. 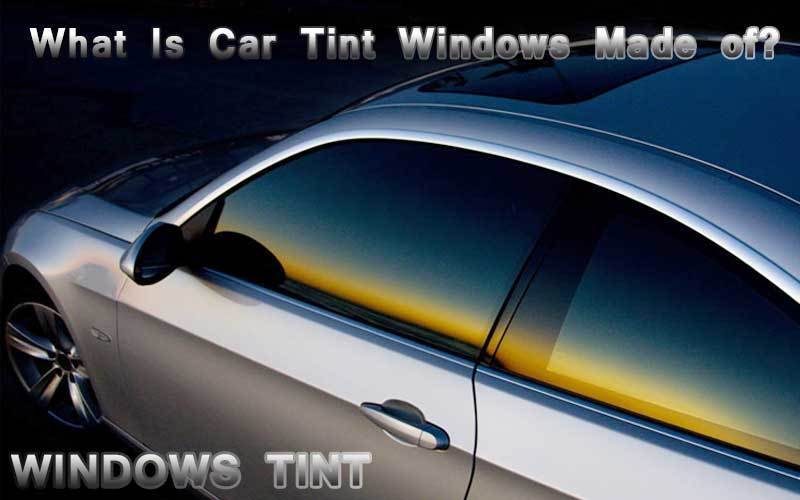 What Is Car Tint Windows Made of

But have you ever wondered how does this little wonder works? Or what are the actual mechanism that lets you enjoy the privacy even on the go?

What Is Car Tint Windows Made of?

Let’s start from the very basic- the material.

Window tilts are nothing but highly engineered stickers that are made of strong polyester laminate. What creates the tinting effects in this glasses is called tinting agent. Tinting agents are distributed as a thin layer right inside the glass.

There are two sides of the glass and both have got some roles to play.

At one side of the window, there are adhesives to stay bonded with the window. While on the other side, there are scratch-resistant coatings. It protects the window glass from external damages.

The scratch-resistant coating also helps to prevent the buildup of containment on the glass itself.

These features and their benefits vary from model to model. Also, the price has a good role to play in this case. But mostly, the basics are the same. 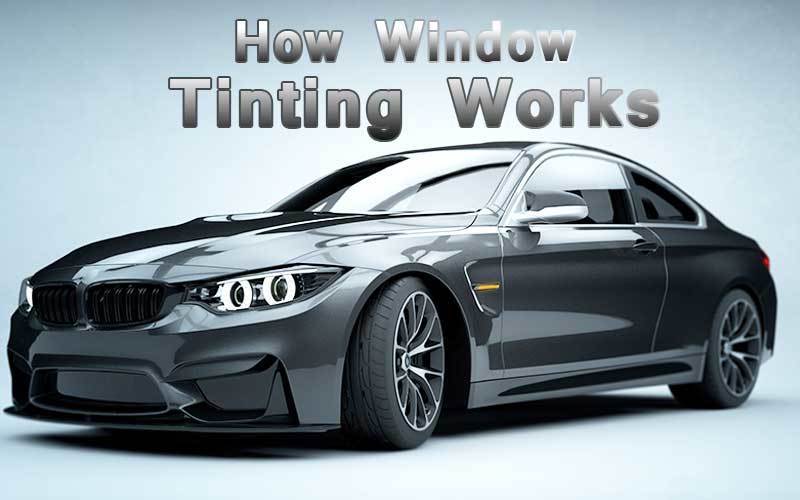 How Window Tinting Works so Good?

Since invention, people took tilting windows as a serious addon to the cars. But what are the actual reasons? What makes this simple layer of chemicals to do the magic?

Here is the catch-

In case of non-tilted window glass, almost 90 percent of the sunlight directly enters into the car. 5% of the light is reflected and the last 5% is completely wasted.

When window tintings are appointed to reduce this figure, we’ve got a firm control over how much exact sunshine we want to let in. It blocks the way of a specific portion of the light beams.

The Design of Window Tint

Once this clear polyester is made, there is another thin layer of film applied on it. This one is made of some other kind of tinting agents. It depends on what exact kind of tinting effect you’re looking for among dye, metal or ceramic. 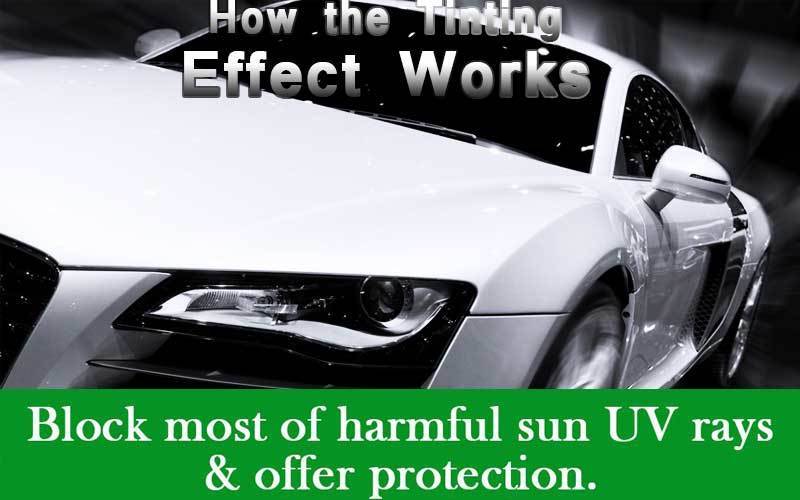 How the Tinting Effect Works

There are many types of tinting films. But in the usual sense, all of them are supposed to do four kinds of works-

Radiation: Radiation prevention is one of the sole benefits that we receive for window tints. Specially, in winter and summer, the car tint is supposed to play the role of heat insulation in between the space of inside and outside the car.

This helps us in both ways. In winter, it keeps the heat of car inside the car compartment. And in summer, it won’t let outsider heat waves enter into the car.

Thus, it keeps the riders and passengers comfortable.

Reflection: This is another primary work on a glass tint. It keeps away the significant portion of sunlight that may contain dangerous visible and ultraviolet rays. The reason behind is, tint layers have something called the sputter coating which is made out of metal particles.

Absorption: The absorption part is more like a health benefit of car tints. When sun rays fall upon it, it absorbs certain portions of it and doesn’t let in to enter into the car compartment. Also, this reduces the amount of visible light and provide the desired darkness the user wants.

Transmittance: Finally, the last job of car window tints is to transmit a certain amount of light into the car interior. This depends on the percentage of light it’s allowed to transmit by its chemical structure.

Read Also: How to Polish and Apply Ceramic Car Coat on Glass – Step by Step Process 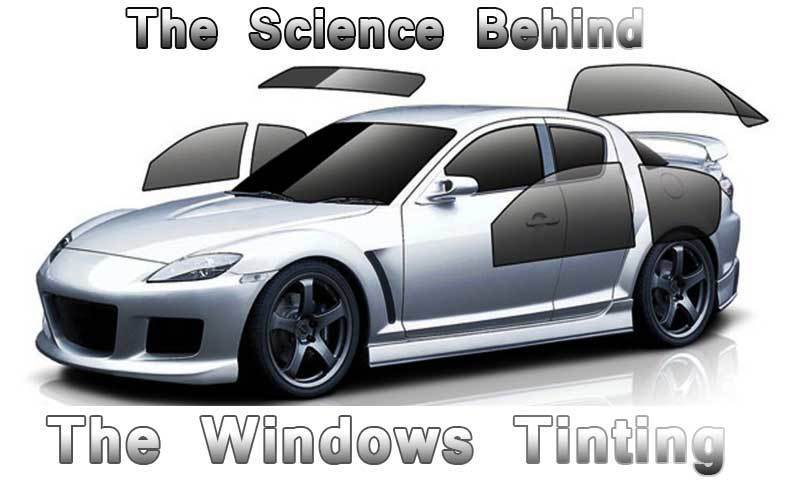 The science behind the windows tinting

The Science Behind the Car Window Tint Effects

As you’ve just seen, car window tint performs four types of actions to keep you safe and sound inside the car. But what’s the actual science behind that?

We will tell you that now. 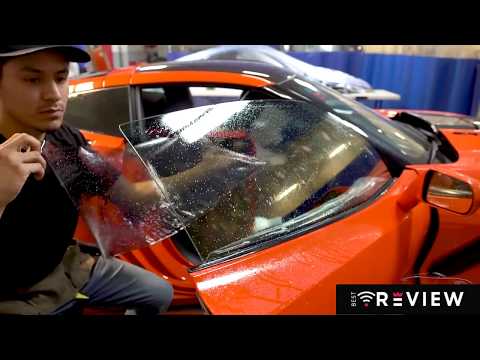 The polyester based film that’s used in building window tint, allows only a number of types of light rays to go through it. Rest of the lights are absorbed or reflected away.

And this power of tints can be varied by variating the number of dyes and metals used to prepare the tint.

Another fact is, these tints don’t impede the visibility in the darkness as the sunglasses do.

So you’ll have a clearly visible view of outside whenever you’re inside the car. This also explains why many people’s thoughts on ‘driving car are dangerous at night if it has a window tint’- is wrong. 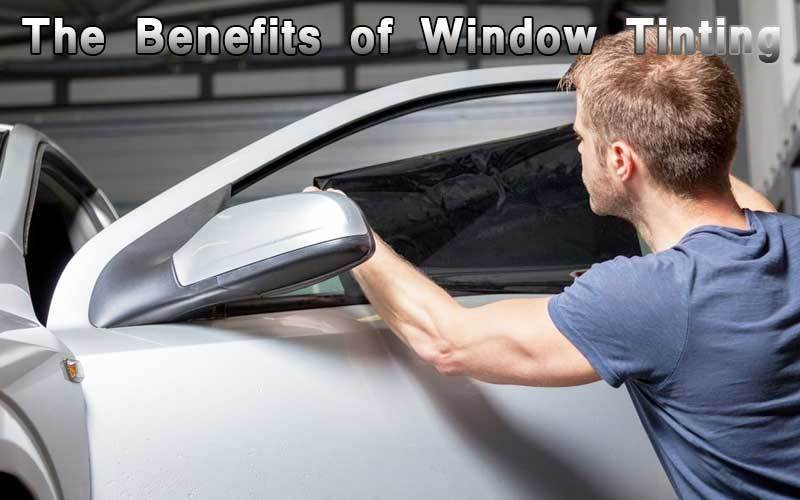 Now that we’ve learned the way a window tint works, let’s have a look at what exactly it serves us with. Also, I’ve written a brief on it in the first section of this article. But here are the detailed version-

Obviously, this is the most important reasons behind equipping your car with tinting windows. Maybe you’re not a celebrity or a pop star, but privacy is what everyone can demand.

But there are state laws about how much tint you can imply on your car glasses. You should definitely beware of that while driving.

Another serious perk you receive through tinting windows is- it filters out the bad part of the sunlight. Also, it cuts down the glare of sunlight and makes driving easier.

Along with controlling the glare of sunlight, these glasses also reduces the number of heat waves that are coming through. If the tilt is there, the heat will be significantly decreased. 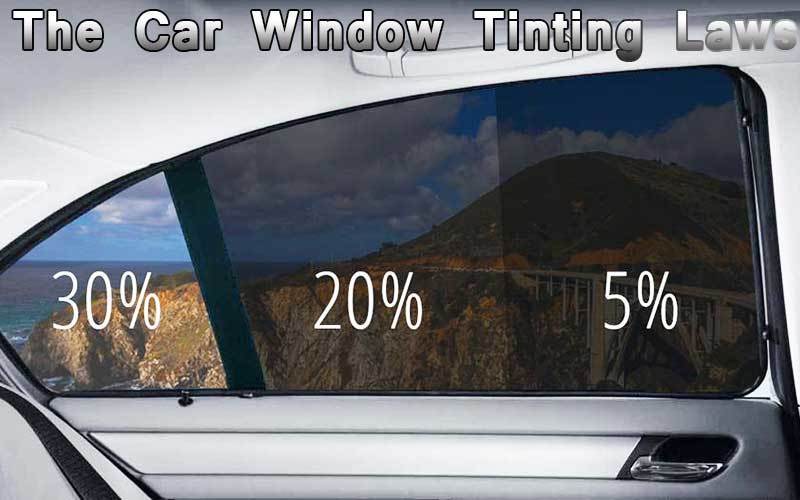 As you know, car tints can provide ample protection from light when you are inside the car. But that’s not solely depended up to your wish that how much of the darkness you can enjoy.

In every state of the United States of America, there are clear laws that regulate which type of window tint can be used, and how dark they can be. Also, the amount of reflection and tinting percentage are also defined by the state laws.

For example, let’s take you through the California States law regarding this matter- 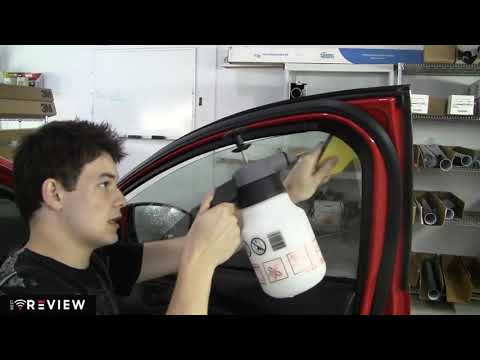 To end up the discussion, here we go answering some of the commonly asked questions-

Question: Does window tint affect on me while I’m driving at night?
Answer: No, it doesn’t. Although there had been a myth regarding this, window tints don’t impact night driving.

Question: Why to install tint glasses from inside of the car?
Answer: The Simplest answer to that is- to enhance durability. You know, if the glass is set externally, there is a good chance to get damaged and affected to outside exposure. That eventually decrease its power of tinting.

Question: Can I turn my window tint completely dark?
Answer: Well, states have their own laws regarding this matter. You can go through your local directory to find the most appropriate answer to this.

Hope this guide gave you a hand to understand the basic principle, structure and working process of car window tints. Also, keep an eye on the state laws before selecting the right window tint type for your own car.

Best of luck and drive safe!

How to Remove Scratches From Cars and SUVs : Step by Step Guide

What is The Best Way to Clean Leather Car Seats?

Unity Struts Review – All You Need to Know About Unity

FCS Struts Review – Everything You Need to Know