Car rust is one of the most common headaches that many car owners have to contend with. However, all is not lost as there are many ways of solving the problem, one of them being using Coca-Cola.

Contrary to what many people believe, Coca-Cola besides being a soft drink, it’s uses fly over the handle with its cleaning capabilities. Cola does not only clean rust, but also oil stains, stinky odor, and tile grout, thus giving you the perfect yet affordable cleaning agent you can trust. 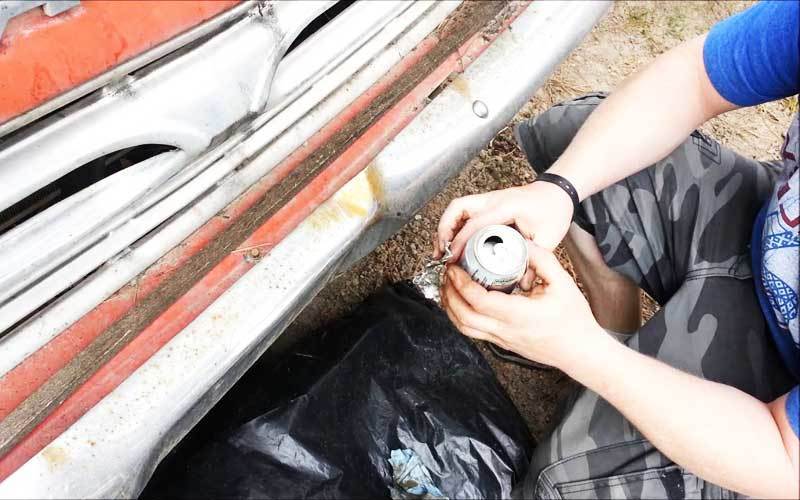 Rust does not only affect your car’s aesthetic value, but also makes it to wear and tear quite quickly, thus losing its value. Coca-Cola therefore is one of the most cost effective methods of dealing with the rust problem, as a bottle costs less than the common abrasive chemicals used for dealing with rust.

In case, therefore, you have been trying to find the most cost effective natural method of doing away with the rust on your car, giving Coca-Cola a chance would do the trick. This article therefore will delve into the steps that you need to follow, when removing car rust using Coca-Cola as well as how it works to ensure this.

You might be asking yourself, how a soft drink works in removing rust from your car. However, it would be important first of all to know what causes rusting. Rust will form on your car’s surface once iron reacts with oxygen either in the air or water to form an oxide.

Therefore, Coca-Cola, being a carbonated drink, will come in contact with metal oxides like rust, and it will tend to dissolve the rust and restore the outlook of your car. In addition, Coca-Cola has a low PH just like any other cleaner you will find in the market, thus being a good cleaning agent.

As if that is not enough, Coca-Cola contains citric as well as phosphoric acid which are good at removing stains and rust respectively. Coca-Cola is therefore one of the most effective but looked down upon cleaning agents for rust, which you can trust.

Whenever you want to remove rust on your car’s surface, it is important to always ensure that the process is never compromised. That is why the first step of removing rust from your car is cleaning it, in order to get rid of any other dirt that it may have.

In case your car is filled with mud or dust, the cleaning process of the rust will never be one hundred percent. Cleaning your car will not only ease the process of rust removal, but it will also make the rust visible whenever you are scrubbing it.

It is worth noting that whenever you are cleaning it, make sure that all the parts are cleaned, especially where there is rust. After you have cleaned the surface of your car, you can then rinse with clean water, before starting the process of rust removal using Coca-Cola.

Step 2: Clean All the Equipment you need

Additionally, you will need a rag, which is responsible for cleaning the car’s surface after you have finished the process. As if that is not enough, you will also need aluminum foil for scrubbing off the rust after you have applied the Coca-Cola.

It is therefore worth noting that it is extremely important for you to make sure that all the cleaning equipment that you intend to use are clean. This is essential, as it will determine the quality of the work that you will be able to do. Before embarking on the process, start by cleaning all this equipment.

Step 3: Apply the Coca-Cola on Your Car’s Surface

After you have made sure that your car is clean and all the equipment that you will be using are in check, you can then start the process by applying the Coca-Cola on the surface of your car. This is a very easy exercise as it does not require any expertise.

All you need to do is dip the clean sponge in the Coca-Cola can so that it can absorb as much cola as possible. After it has soaked, apply the cola-cola on the surface of your car that has rust. You need to make sure that the entire surface is covered with cola for effective and maximum results.

After you have applied the cola to your car, you need to wait for a few minutes in order to give time for the Coca-Cola to react with the rust. Let your car rest for about five minutes, before proceeding to the next step.

Step 4: Scrub the Surface with a Clean Foil

After you have made sure that the Coca-Cola on the surface of your car has reacted with the rust, you can then go ahead and scrub it off using a clean foil which acts as a mild abrasive. However, it is important to note that aluminum foils do tear quite easily and therefore, you need to fold it in 3 to 4 layers.

The good thing with scrubbing your car’s surface using a foil is that it does not damage it or the paint. While scrubbing off the rust, you will see it starting to come off, thus restoring the aesthetic feel of your car. Do not stop at this; you need to continue scrubbing until all the rust is removed.

In case there is still some rust left after the scrubbing, you need to apply the Coca-Cola again and let it sit for a few minutes and start scrubbing again. When appropriately soaked with Coca-Cola, the rust will easily come off thus saving you the time and energy to clean the rust.

Whenever you are scrubbing off the rust from your car’s surface, it will turn into powder and therefore ruin its clean condition. In addition, you do not want the acid of the Coca-Cola to remain on your car’s surface as it can accelerate the rusting that you are trying to deal with.

To cap it off, Coca-Cola can tend to be very sticky at when left to settle on your car’s surface thus ruing its outlook. That is why you need to ensure that you clean the car with clean water and dry off any moisture before you can start using it again.

When cleaning it, therefore, it is incumbent upon you to ensure that you use clean water and appropriate agents to sparkling clean. After you have made sure that it is clean, you can in turn dry it off using a clean rag, as it prevents it from suffering the same oxidation that you are dealing with.

After cleaning and drying it off, you need to repaint your car’s surface again to prevent further rusting in the future. However, in case the rusting had affected parts that you do not want painting, then you can oil it using grease or take care of it by making sure you dry it off whenever it accumulates weather elements like water or snow. You can even park in a dry place.

Coca-Cola is one of the most unappreciated green cleaning agents that you need to use when removing your car’s rust. This is because it comes along with very many green benefits, unlike your common cleaning agents.

Contrary to what many people believe that cola is only meant for drinking, nothing could be further from the truth. There is no difference between Coca-Cola and your normal cleaning agents when it comes to the removal of rust. In any case, Coca-Cola is better as it is not only affordable but also effective in its work.

Due to its attributes, Coca-Cola can clean a host of other items let alone your car rust. For instance, it has some magic of restoring the sparkling nature of your toilet bowls, cleaning grease in your clothes, getting rid of any foul smell, and cleaning tile grout in your home.

With all these usages, Coca-Cola makes it to the top in the list of one of the most effective home cleaners of all time, as it is readily available in the market and very affordable. Never let rust ruin your car’s aesthetic value, while you have a product that you can easily use to address the problem.

Just buy a few cans of Coca-Cola and restore the condition of your car in an instance!

How Many Drive Modes in 2021 f150 Raptor and Their Functions?

Are leather car seats better than fabric? The difference between them

What is The Best Way to Clean Leather Car Seats?