How to Change Fork Oil – Step By Step Guide

Riding a bike becomes more pleasant when all the parts of the bike are swift and easy to handle.

Along with all the parts, the front forks undoubtedly play an important role in the handling of the bike and it’s very similar to the engine.

Because their function is hugely affected by the eminence of the oil within. On the other hand, the forks are more visible than an engine and are filled with so much dust based on usage of it.

This suggests that you should change the fork oil as frequently as you change your engine oil.

What is Fork Oil and Why do We Use It?

Now, here we are talking about fork oil, but the fact is that many of us do not even know what is fork oil and what is the specialty of it. 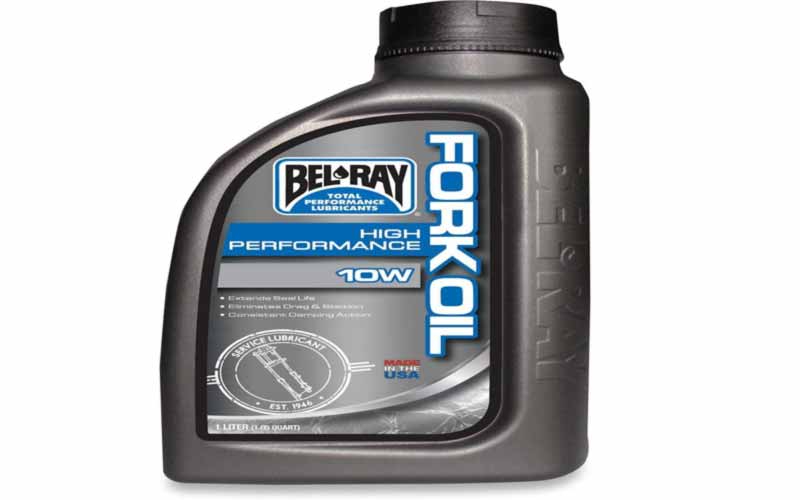 Because the spring of the bike is not too strong to carry the whole front end weight of the bike through a rough surface. And, for that reason, the front forks of the bike is filled with a highly viscous liquid called fork oil.

Now, this is about those who do not know what the term viscosity or viscous is. It means the thick texture of the liquid to stipulate proper lubrication, simultaneously is capable to carry a huge load.

For instance, water is the least viscous liquid as it flows easily, but the higher viscosity liquid is honey as it does not flow off that easily.

Here, if you use a higher viscosity liquid, it will surely provide the proper lubrication but you won’t get the greater amount of energy to stride through it.

Similarly, if you use lower viscosity liquid, it will neither provide great lubrication nor be a good idea to wade up a vehicle. It will cause friction and that’s going to end up in destruction.

Many people do not even know the importance of fork oil and maintenance. They regularly change the bike’s engine oil and brake oil, but they never give a thought to the fork oil. Now, this is because of the lack of knowledge about fork oil.

How to Maintain Fork Oil?

It is not enough to know about fork oils unless you do not know how to use it. Fork oils are the unrecognized saviors of motorcycles. It unassumingly does its job silently without coming into sight.

So, in the future, when you go through an imbalanced surface and do not feel the slightest change on the handlebar, do thank your fork oil. And, when it’s the question of maintaining the fork oil, it is quite easy.

Fork oils remain unexposed slots in the front forks of the bike. Unlike engine oils, it does not come in contact with other factors. That’s why the viscosity and quantity of the oil preserve for a long time.

When you generally go for a service for your bikes, do not forget to check on the front shock absorber performance, because this will tell you when it’s time to change the oil.

Usually, the front shock absorber will get hard or rough or make any screaky noise when it needs attention for an oil change. And, if you do not ride bikes frequently, then you should change your fork oil at least after one year or two.

Moreover, you have to make sure to use the grade suggested by the manufacturer. Because it is determined depending upon the condition of the road and the load that will have to be combated.

Almost most of the bike owners tend to by-pass changing fork oil as they think it is not important enough.
But, let me tell you that this is very important because if you neglect the service, this will bring up new difficulties, like- reducing ride quality, hasty bushing wear, and seeping fork covers that let oil go on the front brakes.

The service should be executed according to the conferring motorcycle manufacture’s suggested intervals. This is normally every year or two, but those bikes are ridden hard in a tough situation, like- In dust, thick mud, should be serviced more frequently for a better output.

But before doing any service, you should always check the shop manual to decide what type of oil is suggested here and the quantity that you need for this service.

And always remember that fork oil has its unique set of requisites, and thus, engine oils can never be a substitute for fork oils.

How to Change Fork Oil without Removing Forks? 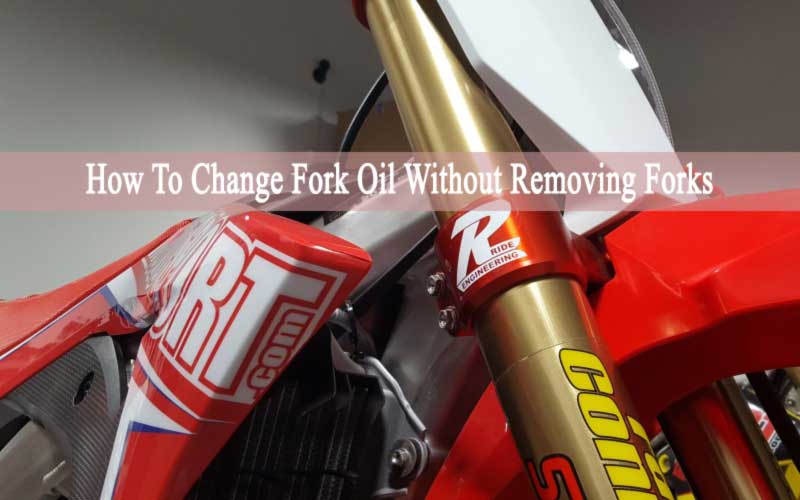 How To Change Fork Oil Without Removing Forks

Here Are a Few Steps About How to Change Fork Oil without Removing Forks:

Now, when almost everything else is said, some of you can ask that when are you going to know that it’s the time to change your fork oil.

Well, here comes the part where we are going to know when you may need to change fork oil when it’s old or bad. Well, it’s not something very notable yet there are few signs of bad fork oil.

The symptoms are pretty less but these cannot be ignored if you want to have a proper front fork. Here they are mentioned below:

So, these are the shortest yet most important symptoms of bad fork oil. And, if these occur, you need to hurry to change the bad fork oil and reinstall the new one.

How often Should One Change the Fork Oil?

Generally, the service manual says to change the fork oil every 50,000 miles. But the reason may vary sometimes depending upon the riding frequency.

The oil inside the fork sometimes gets dirty, loses its lubricity, and does not give service perfectly. That’s why the fork oil needs to be changed every year or two. The oil change is depended on some facts. For instance- the frequency of the ride, the type of riding.

If you a regular user of the bike, then you should change the oil as mentioned earlier because it needs nourishment to ride again.

If you put your bike through the speed, specifically forth the road, this will need more fork oil and maintenance. In that case, you have to change the oil more often.

Additionally, you have to change the fork oil whenever you have a leaky fork seal. This means that it has worn parts and it needs to change there as well as fork oil.

The oil usually provides some beneficiary to forks. Such as- enough lubrication for the fork sliding parts. But the viscosity of the oil will reduce over time and create less damping.

That’s why it needs to be repaired. As well as changing the fork oil, the wear rings need to be changed too. And don’t forget about the dust seals and oil seals. These need to be cleaned and changed if needed.

The feedback is practically proven that if you take extra care of your fork oil and proper cleaning and time to the time change of new fork oil, your bike will be always ready for a smooth ride and this will remain good for some time. So, the secret of a good ride of your bike is to take care of your fork oil as importantly as you do to your bike’s engine oil and brake oil.