How to Change A Fuel Pump – Step By Step Guide Line

You might have ignored these signs. Your car engine stuttered or surged. Over the course of weeks, fuel efficiency dropped. You might also have heard high-pitched noises, and then one day, the engine wouldn’t start only to spoil the perfect day of yours.

Many possibilities are there, but the strongest one is that the fuel pump isn’t okay and that you have to replace it.

Is it too demanding like most car repair jobs? Well, it’s a lot to handle but not back-breaking. This article discusses how to change a fuel pump detailing everything so that you don’t have to feel confused or lost.

How to Change a Fuel Pump?

The job involves five different phases. First, you should relieve the system of the existing pressure inside. Then, you must remove the pump that you want to replace. Then, finish with the installation of the new one. So, let’s start now.

Phase: 1 Prepare for the Job

You’ve certain things to consider before you find yourself in a good position to start.

Many vehicle owners count more on certified auto mechanics than on themselves, and choosing who will handle the job is an important determiner of the cost.

The cost of replacement can be $400-$600 including the cost of the required labor and parts. If you do it alone, the only cost involved in it is the price of the fuel pump which is around $200 excluding the different work tools you’ll need throughout the procedure.

Have the following items together before you start. You may also need some replacement parts which aren’t included here.

The majority of modern automobiles use a special fuel injection system designed to work under high pressure and ensure the supply of the correct mixture of air and fuel to the engine cylinders. 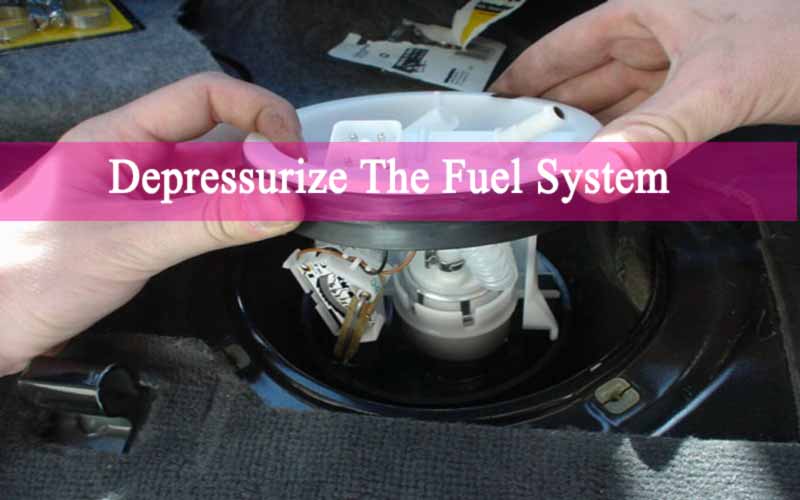 So, before doing any kind of maintenance on it, the pressure that might exist there even after the engine is stopped has to be removed. By not doing this, you’ll only risk having some of the remaining fuel all over your body.

There’re five ways to perform the task depending on your car brand, fuel system, and manufacturer’s guidelines. We’ll discuss all of them precisely.

You need to access the fuel tank’s pump assembly or sending unit. Different vehicles have it in different places, and there’re three known positions.

Some models have the access point above the fuel tank. Having such a vehicle, you may want to pull the trim on the trunk’s floor off or pull and lift the retaining strap on your seat’s back to take out the rear seat. Some have it right through the floor or plain under the trunk trip or underneath the car’s rear seat.

For finding the point on a few other models, you may need to use a floor jack to raise the vehicle’s rear and a couple of jack stands to support it. Once the access point has been within your grasp, you have to proceed this way.

Using the Fuse and Relay

Locate the inertia switch that should be under the dashboard or around the rear compartment or trunk. Many models, especially Ford vehicles, use the switch to stop the fuel supply in the event of an accident.

Now that you’ve managed to depressurize the fuel system, the pressure existing inside the fuel tank should also be removed by taking out the fuel filler neck cap. Only after these steps, you can get started with the fuel pump. 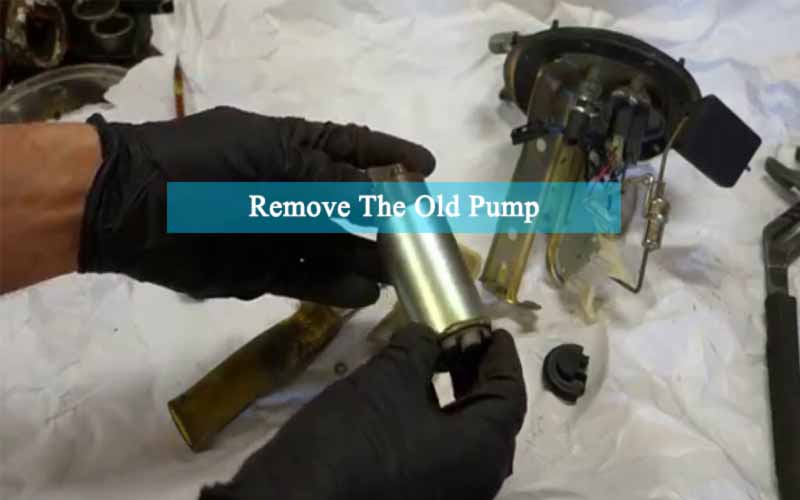 It’s important that you know where the fuel tank rests. You may find the tank at the rear, under the vehicle, behind a body panel, or under the rear seat. Check your vehicle car owner’s manual or repair manual, if necessary.

You’ll see two kinds of pumps. One is housed inside the fuel tank while another is located beneath the vehicle being held by bolts. You may slide under your car to find the pump. You can also jack up and support it using jack stands. Use wooden blocks to prevent the front wheels from rolling towards any direction.

Make sure no components interfere as you start working on the fuel tank. Put a floor jack right under the tank. Then, keep a sturdy piece of wood between the tank and the jack saddle to save the tank from damages.

Raise your jack as much as required to keep the saddle against the tank. Two straps secured by several bolts hold the fuel tank. Use a ratchet that has a long extension or a swivel joint to reach and unbolt the bolts.

Some models don’t require the removal of the tank from the setup. With such a car, you can move onto the next steps without bothering about this one.

Now, you should be able to disconnect the fuel lines or hoses from the tank. You can reach the hoses/lines by lowering the tank only a few inches. If that’s not an option, bring a tool that’s specifically designed to separate the fuel hoses.

Make sure you use mask tape to tag each line or hose before disconnecting them because you don’t want to have trouble reconnecting them.

It’s time for you to separate the electrical connector that powers your car’s fuel pump. Be careful about the locking tabs that keep the connector in its place. They might be too fragile to be handled without caution.

Use clean plastic to cover the hoses and connector and secure them using a rubber band. This little work will help prevent contamination to those components.

On some models, the task is as easy as lowering the tank slightly and then removing the fuel sending or pump assembly. On others, you’ll follow a set of activities.

A cam lock ring secures the fuel sending unit to the fuel tank. Unscrew that ring first. Use a wooden dowel or a brass punch to avert unnecessary sparks. A screwdriver can also be an option, but use a shop rag in between the lock ring tabs and the screwdriver for protection against sparks.

The lock ring must be rotated counterclockwise for a quick release. If the fuel pump of your car is secured by some bolts, unscrew them one by one. Once the module has been removed, perform some cleaning on the top bracket to keep it free of contamination.

With the ring removed, you should try and lift the sending unit set up slowly. You’ll notice a rubber ring or seal around the fuel tank opening underneath the mounting bracket of the sending assembly. Get rid of that seal and bring a new one.

Lift the sending unit carefully out of the fuel tank maintaining an angle. This way, the wire arm that secures the fuel level float can clear the tank opening without causing any damage to the electrical system connected to that long arm.

The long arm typically points to a single position which is the only place the sending unit should rest. So, follow that arm’s direction.

By this time, you’ll have the vehicle without a fuel pump. So, install a new one by taking the following 15 steps.

So, you’ve understood how to change a fuel pump, and now the only thing left to know is how to change an external or inline pump. Well, it’s not as detailed as an in-tank pump.

An inline pump sits inside your car’s engine compartment. Some models have it close to the tank. Either way, you need not access the tank like you do in case of an in-tank pump.

Last but not the least, you should always keep the tank full with fuel up to one-fourth of its capacity. Anything less than this won’t keep your pump cool as you drive. Eventually, the pump will be stressed only to require a replacement sooner than you think, and needless to say, you’ll be going through all these over and over again.